What is Scheuermann’s Disease?

Scheuermann’s disease is a developmental disorder of the spine that results in increased kyphosis (forward curvature, or hunching) of the back. This is due to abnormal growth of the vertebrae in the spine, most commonly of the thoracic spine (upper back).

The disease usually becomes evident during puberty and is equally as prevalent in both males and females.

There are many proposed theories as to what causes the wedging of the vertebral bodies seen in Scheuermann’s Disease, mostly pertaining to defects in the growth of those bones. However, the real cause is still unclear.

Symptoms vary greatly from person to person, but common signs and symptoms include:

How long does it take to recover?

When the individual stops growing, the disease will also no longer progress, and pain will resolve. However, any postural deformities that have developed by that stage (hunched posture or increased forward curvature of the back) may persist throughout adulthood. 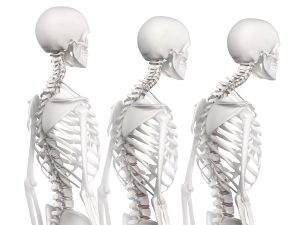 How do we treat Scheuermann’s Disease?

Treatment of Scheuermann’s Disease is aimed at reducing pain from the condition and also minimising the extent of postural problems that can develop from the disease (kyphosis/hunching).

Our experience with Scheuermann’s Disease at BodyViva has shown that the earlier it can be detected and treatment commenced (preferably before he/she has finished growing), the greater chance we have at minimising any ongoing postural problems into adulthood.

Every individual with Scheuermann’s Disease can be affected by the condition in different ways. For example, the hamstring, pectoral and hip flexor muscles may become very tight and restricted, contributing to pain and postural problems. This will be in differing extents in different people. It is therefore vital that each person is assessed individually, with an appropriate treatment plan developed based on what is required.

Treatment commonly includes certain forms of hands-on manual therapy, home exercises and stretches, and braces (if required). At BodyViva, we tailor our treatment to suit the individual.

If you think you might be suffering from this condition, please give us a call and we’ll be able to provide the correct treatment option for you.

Curvature Of The Spine – Scoliosis